I started this design on Christmas Eve and finished it on January 6, the last day of Christmas in Iceland. It is the quietest time of the year here. We had very cold and stormy nights all through that week, and I enjoyed stitching this with the wind howling outside.

I chose the colors as I went along. I was filled with doubts while stitching the house because it was looking “block-ey”, but after I put in the roof and windows, it looked fine. All the colors are HDF mystery variegated colors from my stash, except the moon and the stars (Koi Gold light), the lights inside the house (Koi Gold dark), and the bricks in the chimney (Ex Lark’s Tongue lookalike). I omitted the initial between the tree and the house because it looked too crowded.

This was my “leap year” start. I had been stitching with AVAS silks on the HATS model for many months and was missing my HDF silks. So I started this project quickly and impulsively. The fabric was ready to go, no dyeing or hemming was needed. I selected the colors as I went along.

This is the first Blackbird Designs pattern I have ever stitched. It was a fun stitch and I can see why they are so popular.

This is a Hands Across the Seas sampler I am stitching along with the Facebook group. The SAL started on July 1 this year and will continue for 12 months. I am stitching the 12 parts in the order suggested by the SAL leader. I like the discipline imposed by a stitch-along, although there is the risk that looking at hundreds of WIPs can wear out your enthusiasm for stitching the sampler.

I chose HDF’s 36/40 uneven linen because photos of the antique (see below) show it to be more square than the reproduction. I also liked the grayish color of the linen and tried to replicated it but my clumsy hand-dyeing yielded a more bluish grey than seen in the below photo.

I am choosing colors as I go along, using the called-for DMC as a starting point. I also changed the big honking letters in the second band because I don’t like how they look. Instead, I used the poem line that was on the booklet cover, which is a slight adaptation of Robert Louis Stevenson’s poem.

Birds of a Feather, L'Hiver

It’s been more than a year since I updated my blog. Most of the last 12 months went into model stitching, which meant I didn’t have much personal stitching to show. My mother’s passing in January 2020, and the pandemic in subsequent months left me in no frame of mind to write blog posts.

I completed and sent off the HATS model in July this year, and have been stitching on three different projects since then. Here is progress on the first one. I really would like to finish this one in 2020; let’s see how it goes.

I am very happy with how the colors are developing on the piece, though it did take a while to select them. The red flowers are a combination of three HDF variegated colors – Old Maid of the Flash, variegated OMG Red 1133/35/41, and an autumnal combo of Yellow Spice 4165/Imperial Green 3337/OMG Red 1145.

The twigs and leaves are BeLeaved and Jewelweed 3163.

Old Maid of the Storm for her skirt, and Old Blue Eyes for the bird.

I chose Rubbed Sampler Red for her blouse (click on first photo to enlarge it); though it has the same component colors as Old Maid of the Flash, it is dyed with a different technique, so the two reds flow differently.

And…..HDF silks are back as Vikki Clayton is dyeing again! A ray of sunshine in the dark year that has been 2020.

Posted by mvstitcher | Filed under WIPs

Birds of a Feather, Gander, L'Hiver

I started model stitching for Hands Across the Sea Samplers this summer. So my personal stitching has been on hold for a while. Here is my progress on L’Hiver as of June when I stopped working on it (click on the photo to get a better view).

Last week, I suddenly started missing this project, so I took it out and snuck in a few stitches. Nothing major, only the snow at the bottom. I had started stitching this design at the bottom right with cream colored floss. It was a while before I realized it was supposed to be snow. Rather than ripping it out, I stitched over the cream Xs with a bright white thread. I like the effect.

I am not particularly thrilled about stitching those twigs floating around her, but in the meantime, I am loving the flowers. 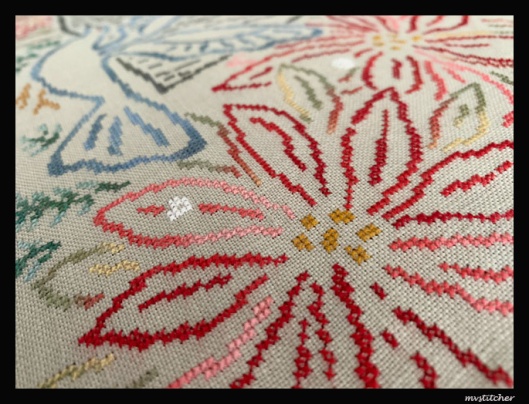 Birds, Birds of a Feather, L'Hiver

I have been stitching at least an hour every day these days, thus making good progress on L’Hiver. As far as possible, I am choosing variegated colors when I convert from the called-for Weeks Dye Works to HDF. Old Blue Eyes – a dusty, faded blue – worked out really well for the birds in this design. The original color specified in the pattern is WDW’s Dolphin – a greenish grey. I didn’t want the birds to blend in too much as they do in the original, so I changed them to an old blue. I am happy with the result. 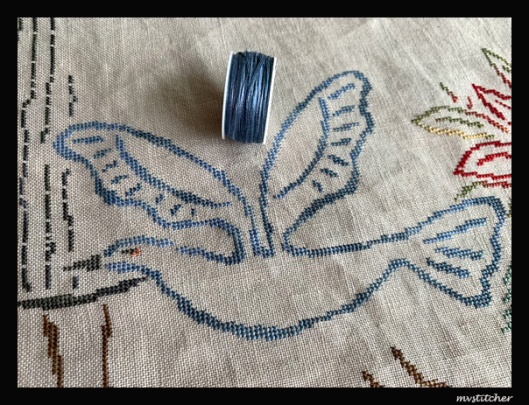 Here is my progress; there is still a long way to go.

This is the third and last post about our weekend trip to the north of Iceland. We had booked our accommodation through AirBnb – a first for us. It was located just outside the town of Sauðárkrókur.

This piece hanging on the wall above the TV immediately grabbed my attention.

Here is a closer look (click on the photo to enlarge). I loved the embroidery in embroidery! The two wall hangings within the wall hanging looks like traditional designs in Icelandic needlework. The design is worked in a straight stitch.

On our road trip to North Iceland this past weekend, we had a craving for coffee and cake in the late afternoon. We first stopped at Ömmukaffi in Blönduós but they had only coffee, no cakes. They directed us to Hunabúð and Bæjarblómið, the flower shop. I was a little skeptical about finding coffee and cakes at a florist but this being Iceland, quirky shops are the norm rather than the exception. 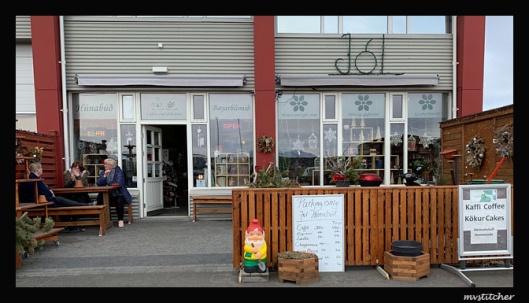 It turned out to be a delightful place – coffee, cakes, flowers, needlecraft, knitting wool, woodcrafts, buttons, toys – it had a little bit of everything. Of course, I honed in on the cross stitch box – a small assortment of European cross stitch kits and needle notions. 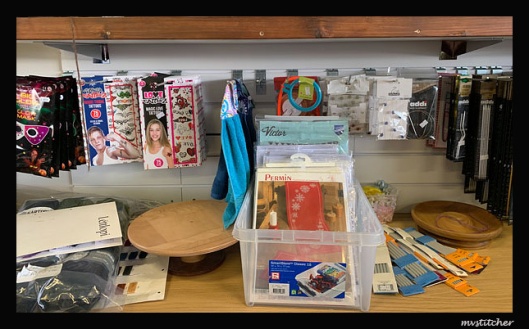 They had a lovely range of buttons in this wooden display and I wish I had bought some..

…but I was just too consumed by my craving for cake. She had three homemade cakes that day and we ordered one of each: chocolate, lemon cheesecake, and apple cake. 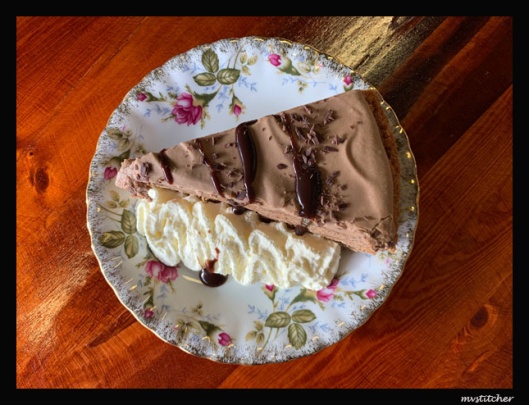 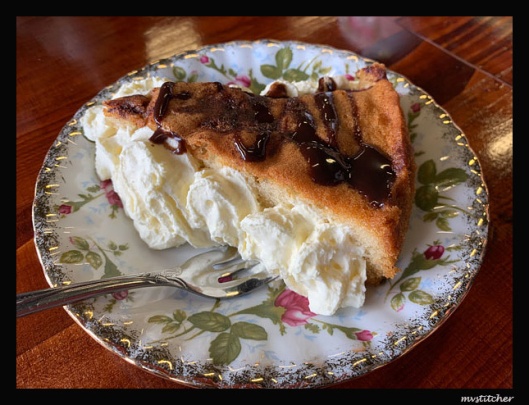 The apple cake was one of the best cakes I have ever eaten in my life! And I loved the serving plates too. Here is our view as we enjoyed the cakes.

From what I gathered through Google translation of their website, the shop originally started as a children’s clothing and toy store, then expanded to include women’s clothing, knitting and crafts. A few years back they bought the flower shop Bæjarblófni and merged it with their existing business.

Though I didn’t buy any craft or needlework items, I thoroughly enjoyed the visit and will make sure to go there again. Hopefully, she will have the apple cake that day.

We went on a short road trip to North Iceland this past weekend. On the way, we stopped for coffee and cakes at a cafe-and-flower shop in Blönduós. I was delighted to find that it was not just a coffee and flower shop (which is unique in itself) but also a crafts store. More on the store in the next post, but here are some old pieces of embroidery on display at the store.

First, two very simple and charming works that were hanging in the W/C. Both are stitched on aida fabric. 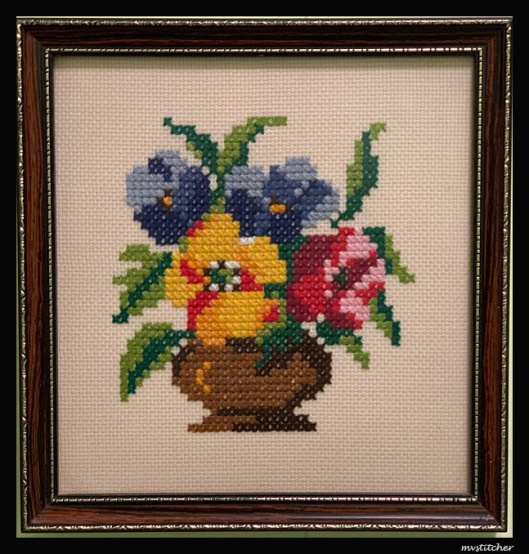 In the store itself, two frames occupied pride of place. The shop owner said she had rescued them from trash. They are at least 50 years old. The lady in red seems to have been quite a favorite of those times!

I tried to take closeups as well as I could but was limited by height. 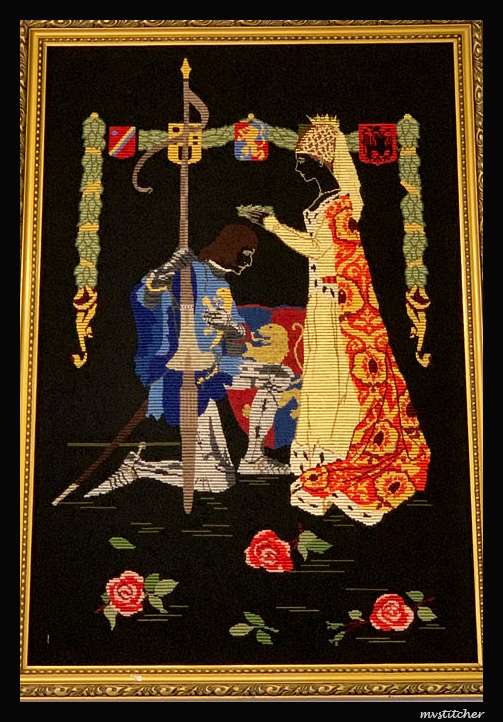 I wonder how many variations of the lady in red could be found in this country? 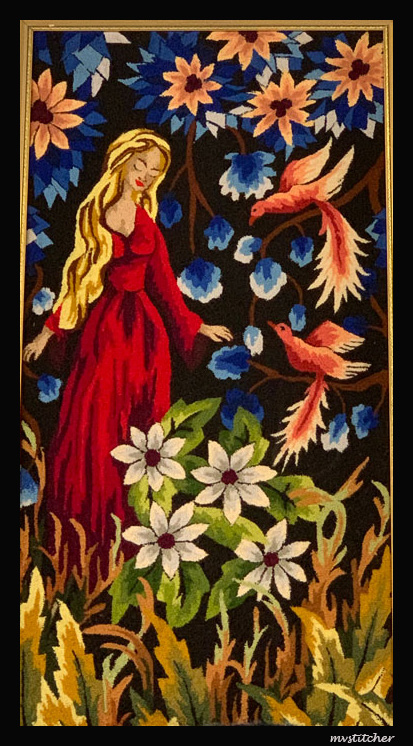 We were roaming around in downtown Reykjavik couple of weekends ago with our friend and strolled into Kolaportið, the local flea market. We enjoyed looking around all the stalls and my husband even found a rare autographed copy of a photography book by Hjálmar R. Bárðarson, the famous Icelandic photographer who passed away in 2009. I was keeping my eyes peeled for needlework related stuff. I spotted this lovely lady in red, who reminded me of other similarly clad ladies in many old samplers. I could not get close enough to see the detail but perhaps it’s punch needle? I’ll look again when I visit the flea market next; hopefully she will still be there.

This was the closest I could get amidst all the junk surrounding her.